Castaway Rachael Matthews chooses poems by Jennifer L Knox, Adrienne Rich, and Kathleen Jamie to take to her desert island — poems to help her manage “the paradise and the hell of solitude”

Today I choose … and it would change in a month or a week … to be stranded in the company of Jennifer L Knox, Adrienne Rich, and Kathleen Jamie. I’m not completely sure why, or if they’d all get along. I once spent a week on a minuscule Outer Hebridean island with only one permanent resident who was desperately trying to grow watercress in a flimsy windproof tunnel and restoring an ancient loom that had an entire room to itself. Needless to say, I was also looking for something. A mirror for my internal landscape; a way out of it. I learned that to be still long enough to watch the weather come and go feels like a power; that pushing myself to an edge was an attempt at mastery over being pushed to one. But mostly that poems had become like food to me.

None of my poem-companions from that trip ten years ago have made it onto today’s fantasy list. They’ve become safely internalized like the lost stuffed animals of our childhoods. One of my rainbow plush toys, Mary Oliver, almost made it with her cri de coeur in ‘The Journey’: “One day you finally knew / what you had to do …”. Alice Oswald’s climactic sequence of similes in ‘Wedding’ where she makes a flight of concepts rhyme (wow) was almost irresistible, particularly because they finally let us queers get married and I joyfully bought in. I also leave behind Seamus Heaney’s call to presence, ‘Had I not been awake’, an echo of my longtime Manhattan analyst’s parting advice: “make sure you’re alive when you die“.

The three poets I’ve chosen for now are either alive, or (I’ve decided) were alive when they died. I know they’d help me with the paradise and the hell of solitude.

U.S. poet Jennifer L Knox (‘Sharon Olds on psychedelics’ according to one critic) comes with me because she can sing in so many keys. Her work is smart, emotionally complex, unpredictable, and linguistically interesting. She’d remind me to find the ridiculous and to laugh. I discovered her poems when first I moved to New York City. As a kid, I’d dreamed of a life in the U.S. where families were happier than my own, with more groceries in the refrigerator, less dysfunction and misery. Poets there were more savvy and progressive. Helpful idealisations, but also ways of self-loathing.

U.S. poet, Knox (‘Sharon Olds on psychedelics’ according to one critic) comes with me because she can sing in so many keys

Knox writes in persona, often using knowing but vulnerable narrators juxtaposed with oblivious others. That’s the relational set-up in her prose poem ‘Hive Minds’, which is the poem I choose to bring. A mother and daughter are in a car together and it’s toxic in there but calm because they’ve each learned, wordlessly, how to cope with the other. Mom counts: “… some inexplicable tally she’s been running all her / life. I imagine it like a spider’s web, easily disturbed, then dispersed / by the breath of other people.” The daughter, even when grown, is never allowed to ride up front (individuate). She’s the let-down child who learns to fear dependence, become self-reliant to survive, blend in, but through romance finds a family who know that even sunflowers give each other “a shot at the light”: “Suddenly I envy anything / that moves itself to accommodate another: a subtle shift to the left / or right, self preservation that could pass for love.”

I’m reminded of Arab-American poet and psychoanalyst Nuar Alsadir’s new book Animal Joy. Her quest to explore spontaneous laughter takes her to clown school where she learns that the clown is the opposite of this daughter because they risk being the tallest sunflower even if it means getting cut down … which is the goal, she says, of psychoanalysis — the spontaneous play of free association; the expression of raw emotion. Of course, it has to feel safe enough.

Knox’s poems, like all good ones, are multi-dimensional in that they afford both ‘good guy’ identifications and ‘not me’ dis-identifications. And your choice will falter on repeated reading. They are didactic in that sense. Subtly moral. And of course it’s precisely the characters you don’t want to identify with that you need to heed most. Knox is sharp; less like Olds on acid, more like Lana Del Rey on Ritalin.

[ … ] traveled, generous thighs
between which my whole face has come and come—
the innocence and wisdom of the place my tongue has found there—
the live, insatiate dance of your nipples in my mouth—
your touch on me, firm, protective, searching
me out, your strong tongue and slender fingers
reaching where I had been waiting years for you

Rich’s bravery gave me courage. The Section 28 legislation meant that I was a teenager coming to sexual maturity in a country where LGBT-themed literature was taken off the shelves in local libraries; where spoken and written affirmation of LGBT lives was banned in schools. These prohibitions are chillingly alive in parts of the US.

It appears to me that Rich has things to say to younger contemporary poets who seem excessively worried about (and mysteriously annoyed by) poetry that is apparently literal. It strikes me as a slightly paranoid act of gate-keeping largely by straight white men who, by definition, have less ready recourse to the ‘personal as political’ than women. Trauma (and I include prejudice and discrimination) often needs a language of witness requiring all kinds of first person narration. The ‘I’ of Rich’s poetry is not bluntly propagandist (which she cautions against). Instead she identifies her “relationship to atrocities and injustice, the sources of her pain, fear, and anger, the meaning of her resistance.” There’s room for everyone at the table … and on the island.

Kathleen Jamie’s poems run clear and clean. I love her poem ‘The Beach’ where she walks the shore in a calm after a storm, neatly condemning humanity for its detritus: “the heaps of frayed / blue polyprop rope, / cut loose, thrown back at us”. What an image designed to shatter humanity’s disavowal of its damage.

When my daughter arrived in lockdown the all-female team who delivered her said in unison “It’s a girl” and raised her aloft. No greater happiness. Jamie’s poem — and others — held the moment of arrival for me before I could fully know it myself

The poem is almost a post-coital companion to Heaney’s beautiful ‘Postscript’ where the wind is buffeting the Flaggy Shore in County Clare and we must let it “catch the heart off guard and blow it open”. That’s the effect, for me, of ‘The Dash’ from Jamie’s 2012 collection, The Overhaul, which is the ‘eco poem’ I’d take to my desert island. It keeps choosing itself as I re-read it. Spring’s coming:

Every mid-February
those first days arrive
when the sun rises
higher than the Black
Hill at last. Brightness

I know this turning on a cellular level from the inside and the outside. I was raised by family members with severe mood disorders. It’s taken me almost half a century to become a mother (to a daughter) myself, and I often feel I’ve wrested the Spring of her from many long Winters. The poem ends:

When my daughter arrived in lockdown the all-female team who delivered her said in unison “It’s a girl” and raised her aloft. No greater happiness. Jamie’s poem — and others — held the moment of arrival for me before I could fully know it myself.

Then, Liz Berry and Jack Underwood helped me though new parenthood by finding words for the chaos and the terror of it all. Her So Tenderly It Wounds Them and his Breckland were bedside in the early days. And this beautiful tiny ‘Lullaby from Deaf Republic’ by Ukrainian American, Ilya Kaminsky, is with me by heart always, everywhere: (“Little daughter / rainwater”). Hear Ilya Kaminsky read ‘Lullaby’ here.

All three of my desert island poets make me lose track of time and feel more fully alive in my body — these are liberations. They hold hope and grief, make me laugh, and help me feel my interrelatedness with nature in the face of pernicious distraction by a patriarchal, colonizing capitalism. For an excellent psychoanalytic take on the latter, see Sally Weintrobe’s article on healing split internal landscapes.

Am I allowed a music choice? Great. I’d like Rita Lynch’s 1991 album Call Me Your Girlfriend. And please don’t send me to a desert island.

Rachael Matthews is a poet and psychoanalytic psychotherapist living in Sussex, UK with her wife and their baby daughter. She is recently back from more than a decade in NYC where she trained and worked at a non-profit clinic (specializing in trauma and creativity – the focus of her doctoral research). Her debut pamphlet do not be lulled by the dainty starlike blossom was published by The Emma Press in 2021. It touches on queer family-making and working class childhood. 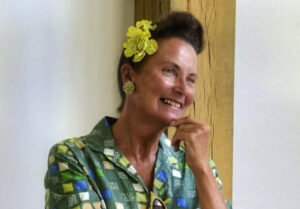 Feature: Katrina Naomi writes about finding permission to write, violence in poetry, and what makes a happy life