Castaway Samuel Tongue chooses poems by Gillian Clarke, Dylan Thomas and Alexander Hutchison, and talks about what first inspired him to write poetry, the “sheer bloody loveliness” of Thomas’ language, and not knowing whether to praise or lament this vanishing world

‘Letter from a Far Country’ by Gillian Clarke

Listen! I love a poem that demands you listen. Not in the way that modern politicians use the word as a placeholder, an obfuscation before they avoid the point of the question and double-down on their selected talking point. In this long poem, the poet calls out to the reader: “Listen! to the starlings glistening / on a March morning!” Although this call comes quite late in the poem, on lines 108-109, I was already listening, entranced by the ways in which this poem addresses “husbands, fathers, forefathers” through a letter which goes “unsigned, / unfinished, unposted.” And I know the call comes on lines 108-109 because the poem is collected as part of the unimaginatively titled Six Women Poets, an Oxford University Press school textbook (edited by Judith Kinsman and published in 1992), complete with line numbering. This academic scaffold impacted me to the extent that all of my juvenilia had numbered lines. I just thought this was how poems should look on the page.

The first time I met poems in a serious, sustained way was in the final years of my comprehensive schooling in South Wales and through this anthology. The six women poets collected for study are Gillian Clarke, Grace Nichols, Fleur Adcock, Carol Rumens, Selima Hill, and Liz Lochhead. I would meet the inimitable Liz ten years later, on moving to Glasgow, but for now, our A-Level teacher had selected two to focus on: Clarke and Hill, with extensive forays into Emily Dickinson’s enigmatic and perfectly tuned work as an addition.

I want to take this poem with me to the island because it is the landscape of childhood and young adulthood, yes, but also because it’s the first time I remember a poem making me really want to write a poem

‘Letter from a Far Country’ is a long poem, 406 lines to be precise. I wish I still had my student copy because I remember it being absolutely spidered with notes, made in pencil of course, and with a joy at the license given to make marginal scribbles in books. The process of close reading into which we were being trained has never killed a poem for me; on the contrary, I loved the attention to detail we were encouraged to pursue, the meanings we teased out, together as a class, and the appreciation of a poet’s skill and reach. Although I had written some wee pieces before – song lyrics, short stories, a poem or two – this attentive reading helped me realise how these word-bombs, these well-wrought urns, these little Sharmanka mechanisms worked; that there were techniques at play that could be learnt and practiced. And Clarke’s poem covered so much ground through its intimate address that I was smitten with this form of writing. How could Clarke compress personal histories with an almost-pastoral, construct a feminist commentary that also takes joy in domestic detail, build a community of characters that centres horror, loss, and tenderness at its heart?

As I write I am far away.
First see a landscape. Hill country,
essentially feminine,
the sea not far off. Bryn Isaf
down there in the crook of the hill
under Calfaria’s single eye.
My grandmother might have lived there.
Any farm. Any chapel.
Father and minister on guard,
close the white gates to hold her.

I want to take this poem with me to the island because it is the landscape of childhood and young adulthood, yes, but also because it’s the first time I remember a poem making me really want to write a poem. As part of our course, we had to produce a portfolio of six poems and much of this early work, and, in all honesty, many of my more contemporary pieces, gravitate towards such a landscape of chapel, farm, water… “reflections and fallen stones; shouts / into the scared dark of lead-mines…” or “barns, and hedges, / in hollows of the hills.” See my poem Capel-y-ffin, below. ‘Letter from a Far Country’ works as a reminder of what a poem can do, the imaginative world it can create and make matter; and that initial spark that made me want to make such things too.

Interestingly, this poem was originally written as a commissioned piece for radio and this leads me nicely on to my next choice; that famous play-for-voices that is Under Milk Wood by Dylan Thomas.

Under Milk Wood by Dylan Thomas

Where to start exploring Dylan Thomas’ Llareggub? Well, of course:

FIRST VOICE [Very softly] To begin at the beginning:

It is spring, moonless night in the small town, starless and bible-black, the cobblestones silent and the hunched, courters’-and-rabbits’ wood limping invisible down to the sloeblack, slow, black, crowblack, fishingboat-bobbing sea […]

I think I first heard this on a drizzly Sunday afternoon, Radio 4 playing the 1954 version featuring Richard Burton as narrator; who could not be carried away into the dreams of the townsfolk on such a rich mellifluous voice? When Burton says “Time passes. Listen. Time passes” this is not a narrative device but the voice of god. And there’s that demand to listen again. Before Under Milk Wood, I had never heard such poetry or imagined a blacker black as that Spring night before the dawn of creation. But it’s the humour, pathos, tragedy, and comedy of Thomas’ characters and the sheer bloody loveliness of the language that drive the play forward; I am sure that it is from his work that I got a sense that any transcendence, however low the ceiling, is to be found in the messiness of daily life, and to write from that bawdy, beautiful, sad, and sensual place. And when my wife opens the blinds in the morning, I try to remind her that “before you let the sun in, mind it wipes its shoes.”

It’s the humour, pathos, tragedy, and comedy of Thomas’ characters and the sheer bloody loveliness of the language that drive the play forward

I once saw Guy Masterson’s solo performance of Under Milk Wood, all 69 inhabitants of Llaggerrub conjured through his voice, body language, and music. I was blown away a second time: the spoken word, the immersive storytelling, the characters that lived and breathed in the telling. All of these elements set me writing, knowing that the audience’s imagination was the place to inhabit, to set up shop. The 1973 screen version of Under Milk Wood left me cold; and a review in the New York Times nailed it:

Gone is any sense of discovery of language, which, when Thomas was working well, could make one feel very young again, almost drunk with surprise and pleasure. The problem is all those pictures. In a way, Thomas did to words what booze did to him. He shook them up, liberated them, twisted them around so that they took on, if only momentarily, a higher order of meaning. The camera has the presence of a sober-sided friend. It interrupts most of the poet’s flights of fancy.[1]Vincent Canby, ‘Under Milk Wood’ Arrives on Screen. Jan. 22, 1973

For me, poems have the ability to ignite a soundscape, visualised and embodied, made real by language hooking out understanding. Or to put it better, the only thing Dylan Thomas “asked of those five brave American actors who joined him in the first readings in New York City in 1953 was that they should love the words … Love the words”.[2]from Walford Davies’ introduction to Under Milk Wood. Penguin Books, 2000, p. xxi Perhaps, during my time as a castaway, I’ll be able to memorise the play in full and feel like I’m not talking to myself.

‘Everything’ by Alexander Hutchison

I arrived in Glasgow in 2008 and Sandy was a very warm welcome to the city and its poetry network, St Mungo’s Mirrorball. A strong and supportive advocate for new and emerging poets, he could be, by turns, playful and iconoclastic, and deeply serious, scholarly. As Poet-in-Residence at the Royal Conservatoire Glasgow, he brought together poets and music-makers in ways that pushed my own practice into new settings and combinations. A passionate lover of language(s) and all they can hold and create, his delight in the sound sense of words, strung together along a vocal liveliness, meant that his performances were always aglow with rich puns and resonances, and an ever-present sense of fun. For me, his poem ‘Everything’ manages to bring all of these aspects together into an incantation, a secular prayer, a song.

Everything that’s clothed or bare
everything is vanishing

Anything for a second there
everything is vanishing

It is a brave poet that attempts to write a poem collecting the world’s jumble together just on the cusp of its disappearance. The repetition of that refrain “everything is hosted / everything is vanishing” allows the poet to range widely whilst being utterly anchored to how this poem wants to sing, not knowing whether it is a lament for a world passing away or a praise-poem for every minute detail: “music, lovers, pillowslips […] speedwell, crocus, lotus, rose”. As such, for me, this poem perfectly encapsulates my own constantly-conflicted-state-of-mind-with-where-we-are-now; should I praise or lament? Sandy’s answer, ringing through the poem like a bell, is deceptively simple, yet takes a whole life. Sitting on my island, whether alone or with other wash ups, this poem will serve as a meditation and hope.

This is the poem to be read at my funeral.

(I remember sitting with Sandy at the Edinburgh Book Festival, listening to Paul Muldoon who, for some reason best known to himself, had decided he wasn’t going to read any of his poems that evening. A couple of beers in, Sandy shouted “read some bloody poems! We want to hear some poems!” With that in mind, please listen to Sandy’s rendition of ‘Everything’ here on YouTube)

Capel-y-ffin
(Chapel at the End)

Samuel Tongue‘s collections include Sacrifice Zones (Red Squirrel, 2020) and three pamphlets: The Nakedness of the Fathers (Broken Sleep, 2022), Stitch (Tapsalteerie, 2018), and Hauling-Out (Eyewear, 2016). Poems have appeared in lots of different places, including Magma, Poetry Wales, Finished Creatures, and Banshee Lit; some have been translated into Arabic, Latvian, and Estonian. Samuel Tongue’s website is here. 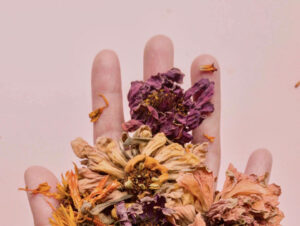