Castaway poet Anne Rouse chooses three poems to take to a desert island. She picks a poem about beauty by H.D., a poem about truth – ‘Die Christi Veritas’ – translated from the Latin by Helen Waddell, and a poem by Yeats about hope, and she promises not to brood too much on the island

Which poets should a castaway stow, metaphorically speaking, in their knapsack? In my twenties I would have chosen the big, male, Anglo-Saxon names with their Ash Wednesdays and Shields of Venus, their Whitsun Weddings; toads, crows and tomcats. Memorable as these poets were, and are, they’ve had plenty of attention for the time being. And those other English-language heavy-hitters – Dickinson, Plath and Bishop – are poets I keep near me, via many half-remembered lines, already.

For the island I’ve selected less canonical poems, compelling enough to trace on the sand or intone to the passing ships: a poetry of defiant delight. (I should probably add that the style of these castaway poems differs quite a bit from my own. They’re definitely inspiring, but more for life than for work. When I write I tend to end up with denser lines, shorter forms, and, occasionally, with more convoluted poetic thought.)

“H. D. Imagiste” Pound called her. As a result Hilda Doolittle (1886-1961) is best known for brief, striking lyrics about waves and pine trees. But H.D.’s oeuvre offers much more even than that. Her novellas are steeped in vision and nuance. In Bid Me to Live H.D.’s protagonist, like H.D., suffers during her husband’s absence in the France of World War I, and also later, unexpectedly, upon his return. In the throes of what we now call post-traumatic shock, he’s become a frightening stranger.

For the island I’ve selected less canonical poems, compelling enough to trace on the sand or intone to the passing ships: a poetry of defiant delight

All this is relevant to my first knapsack poem, entitled, aptly enough, ‘The Islands’, from H.D.’s second poetry collection, Hymen (1921). Read ‘The Islands’ here. She’d presumably written it to her then husband, Richard Aldington, a writer and critic as well as a soldier. In peacetime they’d studied the culture of ancient Greece together. The poem begins:

What are the islands to me,
what is Greece,
what is Rhodes, Samos, Chios,
what is Paros facing west,
what is Crete?

What is Samothrace,
rising like a ship,
what is Imbros rending the storm-waves
with its breast?

What is Naxos, Paros, Milos,
what the circle about Lycia,
what, the Cyclades’
white necklace?

You either enjoy an insistent rhythm or you don’t – personally I’d like to see more poems written with this kind of urgency. The names of the islands add resonance (historic, mythological, literary) along the way, and chanted here they sound melodious too, strung together like the ‘necklace’ of the Cyclades.

Reinforcing that staccato rhythm, H.D. employs a great deal of of repetition. The ‘os’ sound pops up several times; the word, ‘What’ starts every line except for the last one in this section, which begins with the very similar, ‘white’.

The sensory impression on the reader, in other words, is strong. We’re already invested in these islands, yet H.D. herself appears, strangely, to undercut their significance: “What are the islands to me?”. From the first line this sets up a tension, a mystery.

The first poem is about beauty, the second, truth, and we know what Keats and Dickinson said about that special pair of abstractions

The lines break quickly. They’re almost sobbed instead of spoken; choked back. ‘The Islands’ could be called a ‘list poem’, although few list poems are this dramatic. There’s an early summary of the thought: “What are the islands to me, / what is Greece?”, and it’s then that we arrive at the crux of the argument:

What are the islands to me
if you are lost —

The thought is embellished further in subsequent lines, drawing on myth and history, until we begin to feel the chill breath of war:

upon our coast, death keeps
the shallows — death waits
clutching toward us
from the deeps.

At this point H.D reveals what it is that she wishes to celebrate, even more than the islands: it’s beauty. The speaker is asking her lover to keep faith, not with the treacherous land and sea, but with beauty. When she asks, “what are the islands to me / if you are lost”, the word ‘lost’ has a double meaning. She doesn’t want him to lose himself, as an artist, and a fully-alive human, for the sake of ‘Greece’. And she implies, arrestingly, that the path of staying true to beauty, to art, to human love, isn’t an easy one.

In my garden,
the winds have beaten
the ripe lilies;
in my garden, the salt
has wilted the first flakes
of young narcissus,
and the lesser hyacinth
and the salt has crept
under the leaves of the white hyacinth.

In my garden
even the wind-flowers lie flat,
broken by the wind at last.

What are the islands to me
if you are lost,
what is Paros to me
if your eyes draw back,
what is Milos
if you take fright of beauty,
terrible, torturous, isolated,
a barren rock?

What is Rhodes, Crete,
what is Paros facing west,
what, white Imbros?

What are the islands to me
if you hesitate,
what is Greece if you draw back
from the terror

and cold splendor of song
and its bleak sacrifice?

The next knapsack poem is a translation of ‘Die Christi Veritas’. For the Latin see here. I feel it’s even more effective than the original lyric, written in the 13th century by an anonymous monk. How, honestly, is “itur et recurritur” a patch on, “Come and go and come again”?

In this 1929 version of ‘Die Christi Veritas’ from her Medieval Latin Lyrics, the scholar Helen Waddell brings us a tour de force.

O Truth of Christ,
O most dear rarity,
O most rare Charity,
Where dwell’st thou now?
In the valley of Vision?
On Pharaoh’s throne?
On high with Nero?
With Timon alone?
In the bulrush ark
Where Moses wept?
Or in Rome’s high places
With lightning swept?

With the lightning of Bulls,
And a thundering judge,
Summoned, accused,
Truth stands oppressed,
Torn asunder and sold
While Justice sells her body in the street.
Come and go and come again
To the Curia, and when
Stripped to the last farthing, then
Leave the judgement seat.

“Man, wherefore didst thou doubt?
Not where thou wast wont to find
My dwelling in the southern wind;
Not in court and not in cloister,
Not in casque nor yet in cowl,
Not in battle nor in Bull,
But on the road from Jericho
I come with a wounded man.

When you compare this to H.D.’s poem (and each to the work of George Herbert) the shared features multiply: short lines, classical or biblical references, listing, emphatic rhythm, personification, political or social comment, and a marked sense of passion. Moreover, the first poem is about beauty, the second, truth, and we know what Keats and Dickinson said about that special pair of abstractions.

The final knapsack poem has to be Yeats, I think. ‘The Two Trees’ is about hope.

Less insistent than the other two poems, with its gentle rhyming and four-beat lines, it turns edgier in the second half. Like the H.D. poem, it’s a warning, and an especially helpful one in these disturbing times: don’t stare too hard into the dark. I’ll let Yeats (with thanks to The Poetry Archive) have his full say now – and I’ll try not to brood too much, on the island.

Beloved, gaze in thine own heart,
The holy tree is growing there;
From joy the holy branches start,
And all the trembling flowers they bear.
The changing colours of its fruit
Have dowered the stars with merry light;
The surety of its hidden root
Has planted quiet in the night;
The shaking of its leafy head
Has given the waves their melody,
And made my lips and music wed,
Murmuring a wizard song for thee.
There, through bewildered branches go
Winged Loves borne on in gentle strife,
Tossing and tossing to and fro
The flaming circle of our days,
The flaming circle of our life.
When looking on their shaken hair
And dreaming how they dance and dart,
Thine eyes grow full of tender care:
Beloved, gaze in thine own heart.

Gaze no more in the bitter glass
The demons, with their subtle guile.
Lift up before us when they pass,
Or only gaze a little while;
For there a fatal image grows
With broken boughs, and blackened leaves,
And roots half hidden under the snows
Driven by a storm that ever grieves.
For all things turn to barrenness
In the dim glass the demons hold,
The glass of outer weariness,
Made when God slept in times of old.
There, through the broken branches, go
The ravens of unresting thought;
Flying, crying, to and fro,
Cruel claw and hungry throat,
Or else they stand and sniff the wind,
And shake their ragged wings; alas!
Thy tender eyes grow all unkind:
Gaze no more in the bitter glass.

Anne Rouse was born in Washington D.C., raised in Virginia, and is now a UK citizen. Her poetry has appeared in many anthologies and periodicals including the Guardian, the LRB and the TLS, and, in the US, The Atlantic and Poetry. Her first two collections, Sunset Grill and Timing, were PBS recommendations. The Upshot: New and Selected Poems, was a TLS Book of the Year in 2008. She has been a Hawthornden Fellow and was the Royal Literary Fund Visiting Writing Fellow at the University of Glasgow 2000-2002, at St Mary’s College, Queens University, Belfast 2004-2005, and at the Courtauld Institute, London, 2008. Her new book, Ox-Eye, will be published this year by Bloodaxe. 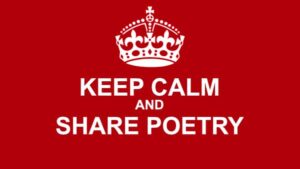 Friday Poems in the Anglosphere

Feature: The Frip has a scout around for other Friday Poems, from Pan Macmillan and Seren in the UK to radio and print in Australia, New Zealand and the USA