You who found your dream but could not spell it

Poetry is poetry – is flexible, multi-use, Marmite. For lots of young people going to school in England poetry is basically haikus and Shakespeare, neither of which goes down quite like Fortnite, or, for those who read regularly, the page turners of J K Rowling or Christopher Paolini. Its image, sadly, is staid and impenetrable (as in Shakespeare) or too much rooted in rules (haiku), leaving its schoolyard social capital wanting. Rap is much cooler, grime and drill more real. Memes are more relevant, and in a 12-year-old’s eyes, TikTok videos, like Vines before them, do more to reflect the human experience than any sonnet.

Except that’s not quite true. The introspection that comes with reading and writing poetry furnishes the self. It turns the mind inwards and trains it, while also connecting readers to nameless, faceless, numberless others who, by dint of their invisibility, exist parallel to the internal, imagined self. Reading poetry is an active pursuit, but its magic fades when introduced to children in classes of thirty, seated in rows and columns, as a necessary obstacle on the way to achieving a good grade. What once projected subjectivity to the page is for Generation Z a pedagogic chore.

It is an opportunity missed. Done right, poetry serves as many purposes as there are flavours of ice cream. For some, it is a vital tool in decoding and representing their experiences to others. In war, it rallies troops; in the context of education, it can help learners understand themselves. In civil society, poetry can engage the masses by distilling tough and complex issues to something tangible and bitesize. Orators use poetic language to win their crowds. And why not? A poems can be short enough to be read in full, more sonically interesting than political talk, and its multiplicity of meanings means that one poem can be relevant to numerous contexts.

She brings poetry to the people who need it, she equips and gives voice to those who might otherwise have continued in silence

Joelle Taylor has devoted much of her life to the intersection of poetry and education. Alongside a successful career as a published author and poet, she has workshopped and educated in schools, prisons and youth centres, with students, refugees and survivors, in collaboration with all manner of organisations. Her preoccupations include the role of poetry post-Brexit, the very notion of borders and the universality of domestic violence. She brings poetry to the people who need it, she equips and gives voice to those who might otherwise have continued in silence. But it is not via the haiku that she does this. Nor Shakespeare. ‘Spoken word’ is the torch she carries.

Spoken word, or performance poetry, emerged from the jazz poetry of the 1920s, via the beat generation writers, notably Allen Ginsberg (see his poem Howl, published in 1984). It was a popular voice for the counterculture, providing a format for activism and dissent liberated by artistic licence, having as much to do with protest as with lyricism or musicality. Political black poetry laid the foundations of hip-hop, while in the UK punk poets like John Cooper Clarke (listen to his poem Beasley Street, recorded in 1980, here) and Patrik Fitzgerald carried anti-establishment sentiments from the streets to the stage. Because of its inherent vitality, its rhythm and freeness of form, spoken word is the perfect vessel for feelings of disenfranchisement and disengagement which are common among school age children.the following link is a footnote[1]Pupils are statistically more likely to be disengaged from school if they come from single parent backgrounds or homes in which the father is long term unemployed; are of Black Caribbean, Roma, … Continue reading Orientated around performance and repeatability, like the verses of Stormzy, Dizraeli and Speech Debelle, spoken word can attract young minds in ways written poetry struggles to.

Taylor founded and spent 17 years at the helm of SLAMbassadors UK, where she coached young slam champions in the art of self-expression. She has a Southbank Centre Change Maker award to show for it and, as much as a contemporary poet can be, she has been canonised. In 2015 Taylor became poet in residence for three Herefordshire secondary schools; her work has been anthologised in English, Arabic, Finnish, Portuguese, Polish and Ndebele (of southern Africa), and features on the OCR GCSE English syllabus.

Taylor’s most famous poem, ‘Last Poet Standing’, carries many of the themes that run through her oeuvre. ‘It’s a love poem, for young people’, she says, introducing it at a NATE event in 2012. Behind the gang violence that dominates much of the poem’s imagery is a more fundamental battle, between self-respect and self-esteem. Tower blocks are gravestones, windows words upon them. Between ‘bruised pavements’ and ‘umbilical streets’, surrounded by chalk lines and police barrier tape, and facing social, economic and educational barriers, young people ‘have dug themselves in’. Their hands are reflected in the knives they hold, so it is the poet’s mission – or the educator’s – to give them poems instead. ‘When you see your face, can you remember your name?’ Taylor asks. ‘The colour of ink is red’, she says, so ‘shut up and speak’. By the poem’s end tower blocks are books, housing is knowledge, opportunities are stories. ‘Open it, there is hope in it.’

‘Those who once believed they were stupid, were failures in the traditional education system, start to understand that they may have been let down by that system, that they themselves may not have been the problem’.

But four years ago, she found herself changing tack. For her 2017 collection Songs My Enemy Taught Me, which collates and retells stories of sexual terrorism and colonisation, Taylor led a series of 18 masterclasses with groups of women and girls across the UK – inmates, traveller communities, domestic violence survivors and young girls affected by genital mutilation (FGM) among them. The collection is a ‘survival manual’ aimed at empowering the participants ‘to tell their own stories’. By anonymising others’ experiences and blending them with her own, she universalises the suffering caused by abuse. ‘It is no sensationalism at work here but resistance’, writes Ellie Julings for Dundee University Review of the Arts.

Although it exists in the form of a book of poetry, Songs is as much to do with protest and vocalising dissent as it is with the written word. It marches, ‘like women have always done’, against silence. Taylor wrote blogposts about the masterclasses, about the process of facilitating forbidden conversations – about FGM, sexual abuse and fear. ‘The girls are a little anxious’, she writes, in post number 297. ‘That’s okay. So am I.’ Honesty runs through her work. Some classes run more smoothly than others. Early on during a workshop with women inmates at HMP Downview, her participants ‘clap in a way that clears ghosts from the room’, inviting her into their fold. ‘I realise I’m talking to friends’, she writes. But, she concedes, the most important writing that comes out of the masterclass will be written in the cells, and it from this admission that Taylor’s philosophy of poetry emerges.

Part of poetry’s power, she writes, ‘is in the form’. Another part is in the words. But the ‘alchemy’ of poetry is in the sharing, in first translating experience and then speaking it. And above all is poetry’s capacity to transform self-perception: ‘those who once believed they were stupid, were failures in the traditional education system, start to understand that they may have been let down by that system, that they themselves may not have been the problem’. By breaking down events that feel overwhelming to a few distinct moments, participants in Taylor’s workshops – in the act of writing and speaking poetry – are able to communicate personal truths accessibly. Afghan Landays, which also feature in her book, are for Taylor ‘one of the most extraordinary forms of spoken word, a hummed resistance’. For anyone whose silence is political, enforced, simply speaking words is an act of defiance. It is activism.

While her poetry grapples with some of life’s greatest injustices, and repackages experiences of horror, it also brims with hope

Poetry is, for Joelle Taylor, both means and end. It can be a communicative tool or vessel, carrying ideas in new and different ways. But when equipped properly, when used well, it has the power to free troubled minds, to shape and convey something vital, to build communities and, ultimately, to be political. So, while her poetry grapples with some of life’s greatest injustices, and repackages experiences of horror, it also brims with hope. It is constantly suffused with empathy for the struggles of others, in particular young people and women, and buoyed by its sense of purpose. I first met Joelle in 2014, and was fortunate enough to introduce her more than once to audiences at our spoken word evenings on the Queen Mary University campus. She was (and continues to be) an icon for me and countless others. Her lesson, that one’s voice is loudest when amplifying the voices of others, is worth learning.

Bruno Cooke is The Friday Poem’s Spoken Word Poetry Editor. He is a postgraduate student studying global journalism with research interests in the intersection of the media, storytelling, culture and politics. His articles have appeared in Groundviews, The Focus and Forge Press, and most are readable on Medium. Bruno Cooke’s website is at onurbicycle.com. He has written four plays and one novel – Reveries, available on Amazon – and currently lives in Sheffield with his partner and their cat Kylo Rennington Spa (the Purred).

Dizraeli – Was a Rapper, performed at Sofar London 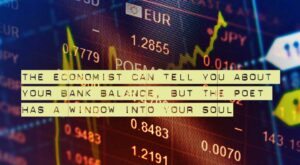 Like worms on the corruption in which they are bred