Mat Riches reviews When I Think of my Body as a Horse by Wendy Pratt (Smith|Doorstop, 2021)

When I Think of my Body as a Horse is about “trauma, recovery and the powerful, animal instincts embedded in the act of creating a family”. Pratt notes on her blog that the collection is “a sort of final segment to the journey of grief directly related to my own experiences of baby loss and body ownership, self-forgiveness and recovery from traumatic loss”.

But the book is also about distance, about how far are you prepared to go and how you choose to look back when you get there. Pratt writes about the distance between the body and mind, distances between people, and between people and things, both temporal and physical. This distance between body and mind is never more evident than in the title poem of the collection, where we are told:

All those years I tried to train it
by punishment! How I hated
its disobedience, how I felt ashamed
of it. Poor body.

And the opening poem, ‘For the Bridge Beneath Which I Became a Flock of Pigeons’ contains a train that “hurtles by so close / the lights halo your hair”.

The poem ‘Broke Horse’, begins “Yesterday my body and I / played Olympic gymnasts” and goes on to say “I blame my body for breaking the rules”. When discussing positives, the personal pronoun ‘I’ is used, but when worry and fear sets in the focus shifts, and the chosen pronoun becomes ‘its’, creating distance. For example, early in the poem ‘Nesting’, “I was giddy with instinct. / I wanted / to pull bits of my new-wild-world / into my bedroom”, but later:

I was afraid of the sheer witch craft
of my body, my poor body and its need
to nest, my animal body and its unformed hopes
its scents and stinks. I was in love
with its sudden grotesque beauty.

In ‘Tampon’ Pratt lampoons the familiar tropes of sanitary product advertising: “the Dalmatians, the roller boots, / the ponytail of sleek, blonde hair, the skin-tight / bodysuit”. The poem amplifies the theme of blame for the body. When the protagonist tries to use a tampon, we are told that they “get it wrong, somehow I can’t align / my body to its shape”. There’s that sense of separation, of distance, again.

A sense of foreboding builds in this collection. The first few poems have a certain darkness about them, but they are merely stops on “the curve / of the track in the distance” before we get to the awful loss, and then the recovery. However there is also beauty to be had, for example in ‘Love Letter to Scarborough on a Saturday Night’. For all the “fighting outside the Christian Centre” and the “first light, littered streets / runners on Marine Drive”, there is “always the promise that something beautiful might swim beneath the grey.”

This is a collection filled with dark moments, dark days, dark years, but it is also filled with strength, resilience, and hope

Early on in the book, there is a foreshadowing of the transformation that is to come, the switch to thinking of the body as a horse, in ‘How You fed Me Like a Wild Animal and I Let Myself Be Tamed’, a love poem to a tender and patient partner. It echoes ‘If You Can Tame It You Can Have It’, the first poem from Pratt’s previous collection, Gifts The Mole Gave Me (Valley Press, 2017), but while the earlier poem is more of an instruction, the later one offers more of an acceptance, more of an understanding of how this person got to where they find themselves:

Because you made me wonder
what it would be like to believe you
when you said you loved me.

Because I wondered what it would be like
to stop.

Because you stood for months
with your hand out flat, filled with food
and I let you feed me.

If the first section of When I Think of My Body as a Horse is about foreshadowing the terrible effect of the loss of a baby – the fact there was “no one left  / who spoke my language” in ‘The Language of Pre-Motherhood’, and the shouting of “my daughter’s story through the gaps” in ‘The Circle of Sisters’ – then the final section provides if not acceptance then a signpost on the pathway to learning to live with things and moving on in a new direction. However, as with all final acts, there’s a moment before the resolution, a revisit of the terror in ‘The Last Egg Collection’, where she says, “This is not a Disney fairy tale. This / is 100% Grimm”.

In ‘It is Not Like Being a Pioneer’ there is an acceptance of how life is different now, of what can be done instead of what wasn’t. It doesn’t mean life is better, only different. There’s a neat call back to ‘The Language of Pre-Motherhood’ with the closing lines:

I almost turn back, back to a place
where I at least recognise the language,
even if I don’t understand it.

The final two poems of the collection point towards a new future, and perhaps indicate some of the power of letting go. In ‘Christmas Eve’:

and on that day I untied the woman
dressed as a mother, who had waited
for a Christmas with her children
and she lifted into the air and dissolved.

In the last poem, ’Self Portrait with Maritime Museum Mermaid, Hull’ the protagonist compares herself to a mermaid in a museum, a fake mermaid, although the sign suggests ‘Probably Fake’ – another signifier of hope, perhaps. Pratt captures them both, herself and the mermaid, in a photo. “We are a little freakshow, all wire and fakery, / empty of biology and withering in a box.” While that “empty of biology” is a brutal line, there is a kind of closure to be had in the final lines

[…] We don’t
Even think of the IVF clinic today. I am thirty-nine.
My husband cries, finally, over our lost babies.
We hold hands. I am swimming away.

When I Think of my Body as a Horse is a collection filled with dark moments, dark days, dark years, but it is also filled with strength, resilience, and hope. If Wendy Pratt is this controlled and precise when dealing with grief then I want to see what she can do with joy. In the title poem she says:

Now my body is a horse, I see
it is loyal, it is incredible. I line
all the bones of my body up,
from the nasal bone, to the thin string
of tail and marvel at its complexity.

Buy the collection, and read the final, life-affirming stanza.

Mat Riches is ITV’s poet-in-residence (they don’t know this). His work’s been in a number of journals and magazines, most recently Wild Court, The High Window and Finished Creatures. He co-runs the Rogue Strands poetry evenings, reviews for SphinxReview, The High Window and London Grip, and has a pamphlet due out from Red Squirrel Press in 2023. Read Mat Riches’ blog Wear The Fox Hat. 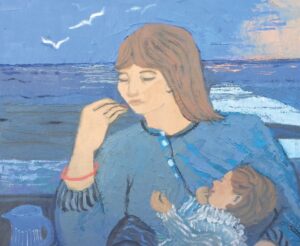