Over the twenty-five years that I’ve been following the U.K. poetry scene, I’ve witnessed countless hands being wrung at the side-lining of poetry by society. However, this act has then been followed by most stakeholders (poets, publishers, arts organisations, etc) sitting on those same hands and complaining, as if outsiders’ lack of interest in the genre were their own fault. One analogy might be the disbelief that some feel at so many other people voting for Brexit. In politics as in poetry, nothing will change unless we all take the bull by the horns and engage with society on a regular and permanent basis.

Of course, that isn’t to say there haven’t been valuable initiatives, be they events such as National Poetry Day or anthologies aimed at a broad readership (e.g. from Bloodaxe Books and Candlestick Press), but little headway has been made in general. What’s more, if the mass media is a barometer of a country’s interests (and whatever we may think of the owners, that’s undoubtedly the case), poetry is going backwards, losing much of its presence in broadsheets for instance, thus being denied the oxygen of wider coverage.

I’d like to pose some questions that are meant to stir debate rather than court controversy for its own sake. Are many of poetry’s protagonists just paying lip service to the idea of reaching out beyond the genre’s bubble? Are they actually more comfortable writing and publishing for other members of the clique? Is it valid for poets to state that the type of poetry they enjoy reading and writing will simply never have mass appeal and to wonder whether it even should? Is poetry destined only to be read by poets themselves? On a personal level, is the poets’ main aim to get and keep a job in academia or is it to find readers? Why do both tasks seem mutually exclusive? And on a commercial level, is the publishers’ business model built primarily around sales or funding?

This leads me to consider much of the poetry that’s being published by big publishers, being shortlisted for awards and making it into major anthologies. I’m not knocking those who achieve these accolades, as the intrinsic literary value of this poetry isn’t to be queried. Rather, I’m pondering poetry stakeholders’ priorities when deciding which work to promote, boost and push towards non-poetry readers.

Let’s imagine a potential new reader of contemporary poetry in the U.K. They might well read novels on a regular basis, but have previously thought poetry’s not for them, or only for weddings and funerals. Their interest may have been piqued by something they’ve seen on social media, on the underground, etc, and so they decide to make baby steps and use major prize-winners as a guide for making their initial purchases of poetry collections. Will they find poems that connect with their own everyday lives and experiences? Will they come on board with contemporary poetry as a result? The sales figures for many such winning collections might indicate that the genre isn’t managing to connect with an extensive customer base via the publicity that’s generated by its prizes.

What’s the point of writing and publishing if nobody reads us beyond our mates, mentors and mums?

Just as certain elements of the poetry world tend to look down on those who seek a more general readership alongside fellow poets, so commercial acumen somehow seems to make a poet or publisher less of an artist. Those who actively chase new readers and audiences appear slightly soiled in the eyes of others, as if proper poets don’t need to do so. In fact, the opposite is true. What’s the point of writing and publishing if nobody reads us beyond our mates, mentors and mums? Moreover, why do poets look askance at others who push their own work? We don’t think any less of musicians who find new ways to offer their wares or actively plug their new albums at concerts, etc.

And what about the artificial division between so-called Instapoets and the rest of us? After all, we all work within the same genre. Just for a moment, let’s make an analogy with wine sales (my day job!). Unless people happen to have friends or family who immediately introduce them to more unusual wines from the start, most of them begin their journeys with widely-available commercial products. Many never venture any further, but others find their curiosity has been piqued and turned into a passion.

Oh, and one key reminder before moving on to specific examples of how we might find our potential readers. In no way am I suggesting the concept of forcing people to write doggerel to order (and nor am I suggesting that all Instapoetry is doggerel either!). Poets should still feel able to write what feels necessary to them, never feeling guilty for doing so. Instead, this piece is aimed at those who wish to venture into different audiences. Moreover, in a similar way, there’s no absolute obligation to push the sales of a collection. Many poets hate the mere idea of doing so or struggle with the consequent social acrobatics. A whole host of people aren’t suited to flogging stuff, and it’s important to underline at this stage that there’s no intention of sending their anxiety levels soaring through the roof. No, I’m simply offering the following suggestions for people who might wish to work to promote their poetry in new ways but are wondering how to do so.

If Amazon are cutting margins to the bone and wholesalers / retail chains are either limiting access to shelves or not pushing books, tied to a sale-or-return model that cannot benefit the publisher or the poet, our genre has to go out and seek alternatives. It goes without saying, however, that all parties in the game have to commit fully to such ventures instead of blaming each other for a lack of sales.

Poets typically complain that publishers don’t provide enough promotional support, while publishers bemoan many poets’ apparent stance that their job is done once the collection is finished. Instead, we have to work with a shared outlook if we’re to find new markets that both circumvent and supplement the established ones. And this is where a traditional view of sales channels has to go out of the window.

Poets typically complain that publishers don’t provide enough promotional support, while publishers bemoan many poets’ apparent stance that their job is done once the collection is finished. Instead, we have to work with a shared outlook

Let’s take my own experience as a quick example: I shifted over 400 units of my pamphlet Tasting Notes, a thematic collection that allowed the wines I blend to tell their own stories. More than half of my copies were sold via tastings and tapas nights which doubled as readings. They ended up with people in the wine trade whose eyes were then opened to poetry, many of whom then went on to buy my other pamphlet and full collection. Their blinkered view of the genre had been jolted.

Our alternatives are numerous and often interlinked. In purely physical terms, one manifestation is the use of non-traditional retail outlets. Excellent work is being done by the Poetry Pharmacy in Bishop’s Castle, a physical location where customers can find coffee, cake and poetry all under one room. People might come in for physical sustenance and leave a spiritual boost! This interesting venture has brought poetry on to the High Street.

And then there are concert halls, farm shops (cleverly done by Clare Best a few years back with her sell-out HappenStance Press pamphlet Treasure Ground), galleries, museums, pubs, visitors’ centres, even garages or service stations, and so on. The inevitable technique is micro-selling, pressing books into consumers’ sweaty palms. Easy to say, but tough to execute, so how may we make that connection?

Well, no one’s going to walk in to a gift shop in Windermere, for instance, pick up a poetry collection with implicit or explicit references to the Lakes (which doesn’t have to be thematic or packed with chintzy rhymes, of course) and buy it of their own accord. We might manage to place a couple of copies on the shelves, but they’ll just sit there for months and years. No, we’ve first got to engage with the staff who deal with the public, be they the owner or the shop assistant, one by one, outlet by outlet. Sell them the story behind the book, make it personal so that they can then offer it and explain it themselves in turn. What’s more, one additional, complementary option is to offer (and then promote!) readings in these unusual locations. Two men and their dogs might turn up or gaggles of passers-by and casual browsers might be drawn in. Either way, such events provide an opportunity to engage with new audiences.

And it’s not just unusual, unexpected locations. It’s our participation in non-poetic occasions such as the wine tastings that I mentioned earlier or, for example, summer fêtes and fairs where the ground-breaking Poetry Pharmacy ambulance has often offered its wares and services. It’s all very well (and also important) for us to give readings at arts centres, in function rooms in pubs, and at poetry festivals, but there is also the chance to move outside those self-imposed boundaries. If everyone chips in, poetry will become far less of a closed shop, and its additional presence will take the edge off its exclusivity.

If the only people who read our Twitter feed are other poets, we might sell a few copies to them, but we’ll never explore the latent markets that are also available via the same platform

What’s more, these techniques for reaching out beyond the poetry bubble can also be applied to social media such as Twitter where we can tag non-poetry people, and share poems, news and virtual launches with communities whose interests might not immediately seem to coincide with ours. If the only people who read our Twitter feed are other poets, we might sell a few copies to them, but we’ll never explore the latent markets that are also available via the same platform.

This isn’t a romantic view. On the contrary, it’s based on more than twenty years’ experience in the wine trade. There are wines that sell themselves on reputation or brand, just like famous novels, but excellent wines from unknown regions will lie on shelves at big chains, collecting dust, while renowned labels fly. The only way to move less popular and populist wines is by word of mouth via small stores and restaurants. Merchant by merchant, I’ve had to sit down with my customers and their staff, over and over again, and explain my wines’ soul so that they can then defend them and encourage people to explore the unknown.

One final point. These lines aren’t meant to be a set of instructions or a provocation. My ideas are a point of departure with the aim of opening up a wider discussion among the poetry community. Where am I right? Where am I wrong? What other suggestions can we come up with? But most importantly of all, do we want poetry to find new readers and become relevant to peoples’ everyday experiences?

My own view is that poetry should attempt to broaden its reach because of the capacity it has to move human emotion and challenge outlooks. It can feed in to so many peoples’ lives and enrich them like no other genre. This is what we can achieve. Together.

Matthew Stewart works in the Spanish wine trade and lives between Extremadura and West Sussex. Following two pamphlets with HappenStancePress, his first full collection, The Knives of Villalejo, was published in 2017. More recent poems have featured in The Spectator, The New European and Wild Court. Read Matthew Stewart’s blog Rogue Strands 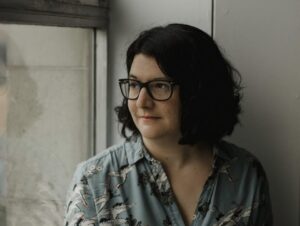