In the first of our new series, castaway poet Ben Wilkinson chooses three poems to take to a desert island. He talks about musicality, mental health, and how poetry can cheat death, as well as how these three particular poems – by Louis MacNeice, Stevie Smith and John Keats – have influenced his own work

A poem, as Don Paterson argues in The Poem: Lyric, Sign, Metre (2018), is a little machine for remembering itself. It’s the only art form where your memory of the thing actually constitutes the thing. You can carry around a tune in your head, or recall the image of a favourite painting, but only a poem can be conjured whole. For this reason, you get to keep as many poems as you can commit to memory, though some linger much longer than others.

This strikes me as a good explanation of why I’ve always tended to be drawn to – and drawn back to – lyric poems that prize musicality. Theme might be one thing, a jolting image another. But for a poem to stick, like a burr in a coat, it has to have a rhythm, a patterning of sounds, that won’t let go. There’s a sense, beyond the sense of the words alone, that the poem’s transformation of subject matter occurs in creating what Robert Frost famously called “the sound of sense”. It says something you’ll never quite forget.

You’d be forgiven for thinking this sounds suspiciously like an attempt to avoid picking just three poems to take to some solitary, windswept isle. Fair cop. Though I’d argue the three poems I’ve chosen, for all their differences, do have that lyric memorability in common. They’ve also taught me unforgettable things about life, about the value and purpose of poetry, and, ultimately, about myself.

For a poem to stick, like a burr in a coat, it has to have a rhythm, a patterning of sounds, that won’t let go

Louis MacNeice’s ‘Wolves’, written in 1935, is a poem that knows its audience. I can’t remember when or where I first read it – probably as a student – but I feel like I’ve always known it. “I do not want to be reflective anymore / envying and despising unreflective things”. Anyone with an ounce of self-reflection has harboured that thought, though great poems have a knack of returning our own thoughts to us, strangely renewed. ‘Wolves’ captures the overthinker’s desire to “keep my eye only on the nearer future”, rather than delve again into introspection, or those long perspectives stretching back and forth. But it also sends up the idea that by “forming a circle” of “joined hands”, distracting ourselves with “talk and laughter”, we can make believe the “wolves of water / who howl along our coast” will be kept at bay.

When MacNeice was writing, late in the interwar period, those wolves were certainly looming on the global stage. In the poem, they also act as a symbol onto which the reader might project almost any fear. MacNeice has certainly influenced my own poetry with his deftly discursive style; I’d need an essay to do justice to his way with syntax, his conversational yet precise lyric voice. Yet in a breakthrough poem of my own, ‘To David Foster Wallace’, an epistle to the American writer who both suffered with and wrote unflinchingly about clinical depression, it isn’t just the chatty, self-mocking tone of the poem’s formal stanzas that can be traced back to ‘Wolves’. I can see how, in writing about coming to terms with mental anguish, attempting to find ways of “keeping away” that particular wolf, I was looking to poetry to help me articulate a dilemma not dissimilar to the one MacNeice presents – to find some potential solution to thinking too much. “Since I was old enough to know myself / I’ve been trying to figure it out – / the constant, gnawing sense of having / had and lost some infinite thing”. ‘Wolves’ taught me that poetry could be a unique thinking-through, a means of bringing complex emotion and the inner world into sharper focus. Even if, ultimately, it can’t protect us from ourselves.

Stevie Smith’s ‘Not Waving but Drowning’, written in 1957, is a poem that manages to be comic and grave at once. Smith might confound a reader who likes their verse either serious or light; her poems are often great because they’re both. The poem sets up a surreal dialogue between a dead, drowned man and those who ostensibly knew him – perhaps friends, perhaps even family. It’s a poem, a bit like ‘Wolves’, that’s open to various interpretations given its precisely productive ambiguities. But it seems to speak most keenly and truly of the nature of depression, and mental health problems more broadly, in a society that still struggles to understand them.

“Nobody heard him, the dead man”. As opening lines go, that’s a belter – strange, intriguing, and arresting all together – and the confession that follows sets up the extended metaphor, neatly developed by the deceptively nursery-rhyme-like cadences of the poem’s three quatrains. “I was much further out than you thought / and not waving but drowning”. The second stanza sees the “waving” man’s death dismissed as an unfortunate accident by those who knew him. “Poor chap, he always loved larking / and now he’s dead”. The water “must have been too cold for him”, they conclude. “His heart gave way”.

As the theatre critic once quipped, first get them laughing, then when their mouths are open, pour truth in

Smith’s incorporation of this lightly dismissive, literal reading of the dark metaphor at the centre of her poem into the poem itself is nothing short of genius. Suicide remains the most common cause of death in men under fifty, yet how many times do we hear the wholly tragic story of someone taking their own life whom everyone assumed was happy, perhaps even the life and soul, who “always loved larking”? In a society that is only just beginning to learn how to talk seriously about mental health, in which men are still often trapped within the expectations of a rigid masculinity – attempting to perform strength and resilience alongside emotional inarticulacy and isolation – the graveness of dismal mental health emerges too late. “Oh, no no no, it was too cold always / (Still the dead one lay moaning)”.

What might look, from a distance, like waving, is a man out of his depth and drowning, unable to seek help in a world that he has been conditioned to feel expects him to struggle alone. In a poem of my own such as ‘Pal’, which personifies male depression as a shadowy other, a ‘friend’ that likes to check in on you from time to time, I can see how Smith’s light touch and subtle, dark humour has influenced my own approach. “Knowing it’s been too long since last time / he’s come again, especially to see you. Wants to hear how you’ve been”. As the theatre critic once quipped, first get them laughing, then when their mouths are open, pour truth in. Poetry is rarely laugh-out-loud, but Smith teaches us how lightness can go a long way in exploring the darkest of subject matters.

Read ‘Not Waving but Drowning’ by Stevie Smith here

I really am a cheery sort. We’ve had wolves baying at the coast, a drowned man, and for my final desert island poem I’m choosing Keats’s ‘This Living Hand’, a brief meditation on what the written word might salvage beyond death. But then happiness writes white, as they say. When Frank O’Hara mockingly said “if you don’t need poetry, bully for you”, he was really pointing up the art form’s ability to be wholly life-affirming in our darkest moments. Poetry can be playful, but when it matters, it is also wholly engaged in the business of life and death.

Keats wrote the peculiar fragment ‘This Living Hand’ in 1819 in the margins of an unfinished poem, at a time when his health was perilous. He likely already knew his days were numbered. In its direct address to the reader and memento mori, it almost reads like part of a soliloquy from some tragic play. Consisting of just eight short lines, the poem finds the poet recognising that while his hand is “warm and capable” in the moment of writing, by the time a reader encounters the poem, it will likely be “cold / and in the icy silence of the tomb”. But more than that, it is a serious attempt by Keats to discover aspects of the system of language – how it is that poems are not only made with, but succeed through, words rather than ideas. A legacy of the Romantic period, coupled with our consumer-capitalist age, is the sovereignty of the individual. If contemporary poetry remains generally too attached to the delimiting notion of the individual voice, as if author and poem almost formed a continuum, it is likely largely because it makes for good marketing.

Just as a joke’s success rests ultimately on humour landing with its audience, a poem succeeds primarily through a convincing speaker, making meaningful connections beyond the confines of our own lived experience

But what Keats’s ‘This Living Hand’ precisely illustrates is that any poem ultimately succeeds through a conjuring trick: the presence of a seemingly real speaker is made possible by the poem’s conjuring of the illusion of the present moment. “See here it is”, as Keats’s poem ends. “I hold it out towards you”. Keats’s actual hand is long since buried along with the rest of him, whoever he was, in a cemetery in Rome. But anyone reading his poem now can’t help but feel a living hand reaching out to them, in this very moment. In that very real sense, poems can cheat death, even if their author can’t do the same. In my second book of poems, Same Difference, I’ve looked to more readily interrogate poetic voice. I’ve adopted various voices clearly distinct from my own, but more interestingly, I think, the poems often attempt to ask what my voice, what any voice, might be anyway. Just as a joke’s success rests ultimately on humour landing with its audience, a poem succeeds primarily through a convincing speaker, making meaningful connections beyond the confines of our own lived experience. “Dear reader, just know I’m somewhere here / and feel the shit that drags for all of us. / Everyone and no one. Perhaps that’s enough”.

Ben Wilkinson’s poetry collections are Way More Than Luck (2018) and Same Difference (2022), both published by Seren. His poetry has appeared in national and international publications including the Guardian, New Statesman, The Poetry Review, The Spectator, and the Times Literary Supplement, and has won prizes including the Poetry Business Competition and a Northern Writers’ Award. For over a decade he has reviewed contemporary poetry for the Guardian, The Poetry Review, and the TLS. He is the author of a reader’s guide to the poetry of Don Paterson (Liverpool University Press, 2021).

Read about Louis MacNeice at the Poetry Foundation site here.

Read about Stevie Smith at the Poetry Foundation site here.

Read about John Keats at the Poetry Foundation site here. 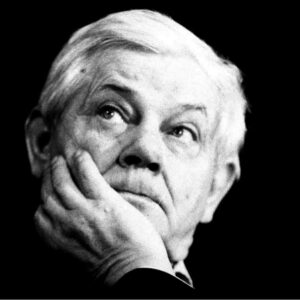 Feature: Steven Lovatt on reading poetry in translation and the style and sensibility of Zbigniew Herbert