We chose Michael Grieve’s sestina ‘A Harp So Strung with Rain’ because it is subtle, clever, and very neatly done. Grieve manages the form adroitly, softening the inherent repetition with the loose conversational flow of the narrative, and because the six end words are so well chosen nothing feels obtrusive or artificial. We like the fact that the sestina form is particularly appropriate for this content — the sestina was derived from 12th Century troubadour music  — and we love the power of the final tercet.

A Harp So Strung with Rain

It was a long forgotten folk saying
I thought, though one that neither she nor I
had any means of bringing to the open.
Neither our luck nor expertise nor will
would serve us well, and by the end my
expectations were almost wholly dark.

The harp itself was both ornate and dark.
It stopped the dig, and all they had been saying
about the waste of time it was. When my
assistant told me what we’d found, well I
picked up the phone at once: So Connie, will
you come? I heard her suitcase open

on the call. At first the harp was open
to the rain, but soon, inside a tented dark,
we worked it free against whatever will
had buried it. Connie saw the ‘saying’
carved onto the soundboard first, like nothing I
had seen before. It seemed that all of my

research had come to naught. How could my
theory make room for such a script? An open
call was made, and I must say that I
was mightily surprised when some dark
skied hovel from the north replied saying
We don’t know what this is yet, but we will.

They found a mention in some ancient will
of a lyre inscrib’d with wordes of Ptolemy
but couldn’t tell me what the thing was saying.
Connie had to leave. The case was open
and I was left quite truly in the dark
with nothing but the I, I, I, I, I –

each stroke a drop of falling rain – till I
was lost inside a dream. And as dreams will,
I heard the ancients playing in the dark
upon a harp so strung with rain my
lips – which were so near to bursting open –
could frame no single note. I was saying

nothing, and have barely spoken since. How will
I speak? It is my open burial
to listen in the dark to what they’re saying.

Michael Grieve lives and work in Fife. He was shortlisted for the Edwin Morgan Poetry Award in 2020, and his pamphlet Luck is published by HappenStance Press. Other poems have appeared, or are forthcoming, in The Scores, Perverse, Magma, Gutter, and Bad Lilies. 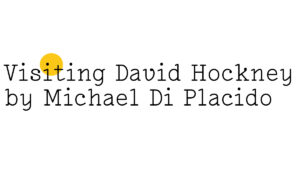